As one of the most endangered species on the planet, is particularly affected by the degradation of the river ecosystems. This is due to the fact that the mink is a species that needs the natural woodlands and wetlands alongside the rivers during the different stages of its life.

The European mink (Mustela lutreola), as one of the most endangered species on the planet, is particularly affected by the degradation of the river ecosystems. This is due to the fact that the mink is a species that needs the natural woodlands and wetlands alongside the rivers during the different stages of its life. The LIFE + MINK TERRITORY project is directed at restoring the river habitats along the lower reaches of the Aragón and Arga rivers in Navarre and at increasing the mink population there.

The area comprising the lower reaches of the Arga and Aragón rivers is one of the sites of community importance (SCI) included in the Natura 2000 Network, primarily due to the presence of woodlands that are representative of the Mediterranean rivers (poplar and willow riparian woodlands) and species such as the European mink (Mustela lutreola), otter (Lutra lutra), European pond turtle (Emys orbicularis), the Black-crowned night heron (Nycticorax nycticorax), etc. Furthermore, habitats of interest, such as meanders, are present in these two rivers, which are generally very dynamic.

As is the case of most European rivers, conservation problems are related to a lack of space for the river. Most of the flood plains have been occupied by agricultural land or poplar plantations, which are generally municipal property. In the past, river ripraps and defences were constructed in order to protect the agricultural land and tree plantations and, in the case of the river Arga, the bed was channelled in order to protect the downstream settlements against flooding.

These defence infrastructures considerably reduced the dynamics of these two rivers, leading to a reduction in the natural habitats available, which in turn limits the biological diversity of the area.

The European mink is particularly affected by the degradation of the riverine ecosystem, being a species which uses the natural woodlands and wetlands alongside the river during the different stages of its life cycle. This area is home to 20% of the population of this species in Navarre and 2/3 of the Iberian population, giving an idea of the importance of restoring the riverine ecosystems in the lower basin of these two rivers as part of the overall strategy for the conservation of species.

This in turn is a responsibility, understood by the competent authorities, who have decided to take measures in the area in order to restore the riverine ecosystem and to improve the conservation status of the European mink.

With this in mind, the Government of Navarre (with authority for environmental matters), the Ministry of the Environment for Spain and the Ebro River Water Board (with authority for water-related matters) are working together on this project through their public companies: GAVRN (public company of the Government of Navarre); TRAGSA (public company of the Spanish State). The local authorities (12 municipalities) area also supporting the project.

The project aims to restore the habitats used by the European mink (Mustela lutreola) on the lower reaches of the Aragón and Arga rivers, during some stages of its life cycle. And, indirectly, the project also expects to improve the conservation status of the actual European mink population.

To achieve this goal, the proposal is to apply the River Territory concept as a way of safeguarding biodiversity and of achieving a good ecological status, whilst also ensuring that all actions adopted are compatible with the enhancement of local community interests.

The measures to restore and improve the potential habitat of the European mink in the river territory are directed at recovering and increasing the European mink population in the area. This will guarantee the preservation of the species in the area and will promote the recovery of specimens in the neighbouring populations.

The restoration of the flood plains and the natural habitats on which the mink depends in order to complete its life cycle, will permit the coordinated application of the three European river management related Directives: the Habitats Directive; the water Framework Directive; and the Flood Prevention Directive. It is also expected that this model will serve as an example for the management of other Mediterranean rivers.

The project is structured around two key areas of action:

Management of the habitat

actions directed at achieving habitat management goals and restoring the natural river ecosystem, the habitat of the European mink.
2

there is a need to establish communication instruments, environmental education and a participation plan to promote the consensus, co-operation and participation of society in the implementation of the project.

With regard to the management of the habitat, the project contemplates the restoration of the natural floodplains, which are currently occupied by agriculture and tree plantations. To do so, there are plans to purchase private plots of land and to lease out the right to use public plots of land, to compensate the loss of profits derived from having to abandon the activities conducted on the flood plains to be restored.

Once agreements have been reached with the private owners and the municipalities, work can then start on removing the ripraps and restoring the habitat. Particular care shall be taken to use native plant species and varieties. This shall be guaranteed by collecting seeds from the site and growing these in nurseries in order to produce the plants required. Invasive species shall also be eradicated, as these plants reduce the biological diversity and are harmful to the conservation of the native species.

With regard to the communication and participation actions, a permanent project Information Point is to be set up and there will also be specific campaigns on environmental problems (invasive species), street public awareness campaigns, educational programs for schools, the organisation of, and attendance at, meetings and conferences, a volunteers' program and an extensive process of public participation. Some of these actions shall be specifically directed at the different sectors of the local community, although the plan is to reach society as a whole. 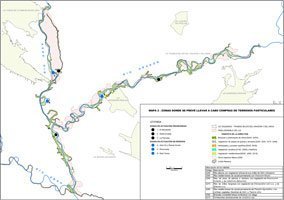 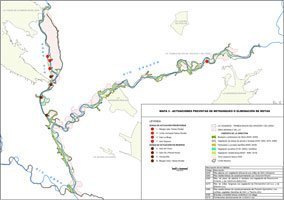 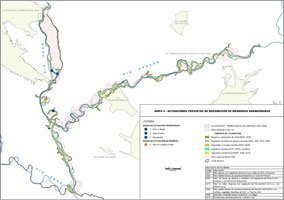 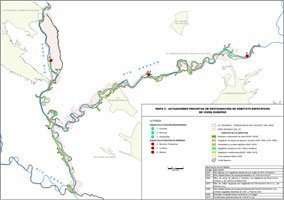 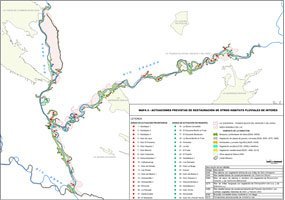 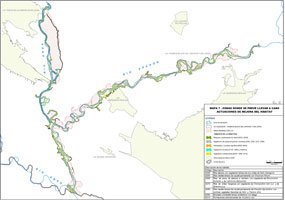 The implementation of this project is expected to achieve an overall improvement in the river ecosystem, leading to the recovery and increase in population of the European mink and its habitats in the area, together with a decrease in the main threats to the mink.

Meanders, wetlands, flood plains, riparian woodland and river beds are to be restored in order to improve the carrying capacity of the area for the target species and the habitats. The project also seeks to achieve a significant change in the importance given by society, its attitude, its perception and attitude to nature, the river territory and the conservation of biodiversity.